My trusty Macbook Pro early 2008 (Penryn, 4gb, 840 pro ssd) has failed to boot and no amount of Cmd + Option + P + R can revive it. This happened the next day after I bought a Macbook Air 2013. So I thought I will tinker with it as I have nothing to loose except for an app mockup that I have toiled around for two days. 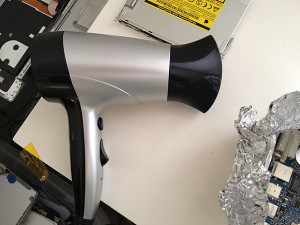 First, I tried reviving it using a hair dryer method as it worked before with Xbox 360.  I have cleaned it up and applied a thermal paste (Zalman). It has produced the wake-up sound but no luck in booting.

Then I stumbled with this blog by Russell Heistuman about baking the logic board of a Macbook Pro and give it a try.

So I preheated the oven for 10 minutes setting it to “Bake” and 190°C. I placed the board on top of baking tray with an aluminum balls as advised from the blog. Then I timed it at 7 minutes and 30 seconds.

I let it cool down for 15 minutes. Re-apply the thermal paste and re-assemble the whole thing. I heard the boot sound and it was music to my ears.  Thanks to Russell for the second life of this MBP.

This site uses Akismet to reduce spam. Learn how your comment data is processed.